What we've learned about restaurant operations after 1M tasks

Whether you believe in the 10,000 hour rule, the 10,000 experiment rule, the quality experience approach, or anything else, it’s impossible to deny that learning is a process.

Even after being in the restaurant industry over 30 years, it’s safe to say that I’m still learning. But I am happy to report that I’ve also learned a lot—and the issues I ran into during those 30+ years are a big part of why I created OwlOps in the first place.

Now, after over 10 years, 2000+ restaurants, and closing in on one million tasks, we’re beginning to see those issues manifest in the form of data, and it’s giving us some unique insight into how owners and operators can begin to resolve them.

So to share that knowledge for the betterment of the industry as a whole, especially those in restaurant operations, we’ve put together this post to look at three key things we’ve learned over the last million tasks.

As I’m sure you know, it takes the right people at every level of positional hierarchy to keep a restaurant — let alone multiple — running smoothly. That includes ownership, operations and personnel management, and food prep, as well as those taking orders and handling cleaning.

But what’s most often overlooked is how vital it is to have an external group of reliable IT and maintenance personnel to manage everything your internal team can’t.

Take a moment to consider the implications of some all-too-common issues that can quickly throw a wrench in the gears of any restaurant operation. Malfunctioning equipment can keep you from fulfilling orders. Downed POS systems, credit card readers, and even broken signage can end up turning customers away. Even something as simple as a leaky sink can pose a poor experience, if not a safety hazard, to customers and employees alike.

Given all that can go wrong, it should be no wonder why restaurants average 4.8 tasks per day between equipment, facilities, IT/POS, and maintaining appropriate supplies.

With nearly 150 requests per month on average, that means it’s not only imperative to have a reliable network of IT and maintenance folks at the ready, but also a system that provides you and your internal and external teams the ability to centralize and streamline communication, scheduling, and progress updates.

Preventative maintenance needs to be a bigger priority

If you hadn’t guessed, requests to fix equipment represent more than half of all task requests restaurants make to their teams both internally and externally—58% to be exact.

While this plays into the idea that our maintenance and IT support teams are significantly important, it also says a lot about how much time and money businesses can save simply by being proactive instead of reactive.

Based on our data, we learned that restaurants that practice preventative maintenance resolve maintenance tasks 11% faster than those who don’t—4.9 days vs. 5.5 days respectively. If that doesn’t seem like a lot, trying extrapolating it into half a business day’s average revenue or a percentage of you or your employee’s time in a day, not to mention what else you or they could accomplish with 11% more time.

And remember, that also represents over half of all requests made on a regular basis, which means making that one simple shift to practicing preventative maintenance provides cumulative benefits, from improving the lifespan of your equipment to saving yourself and your employees loads of time and money. 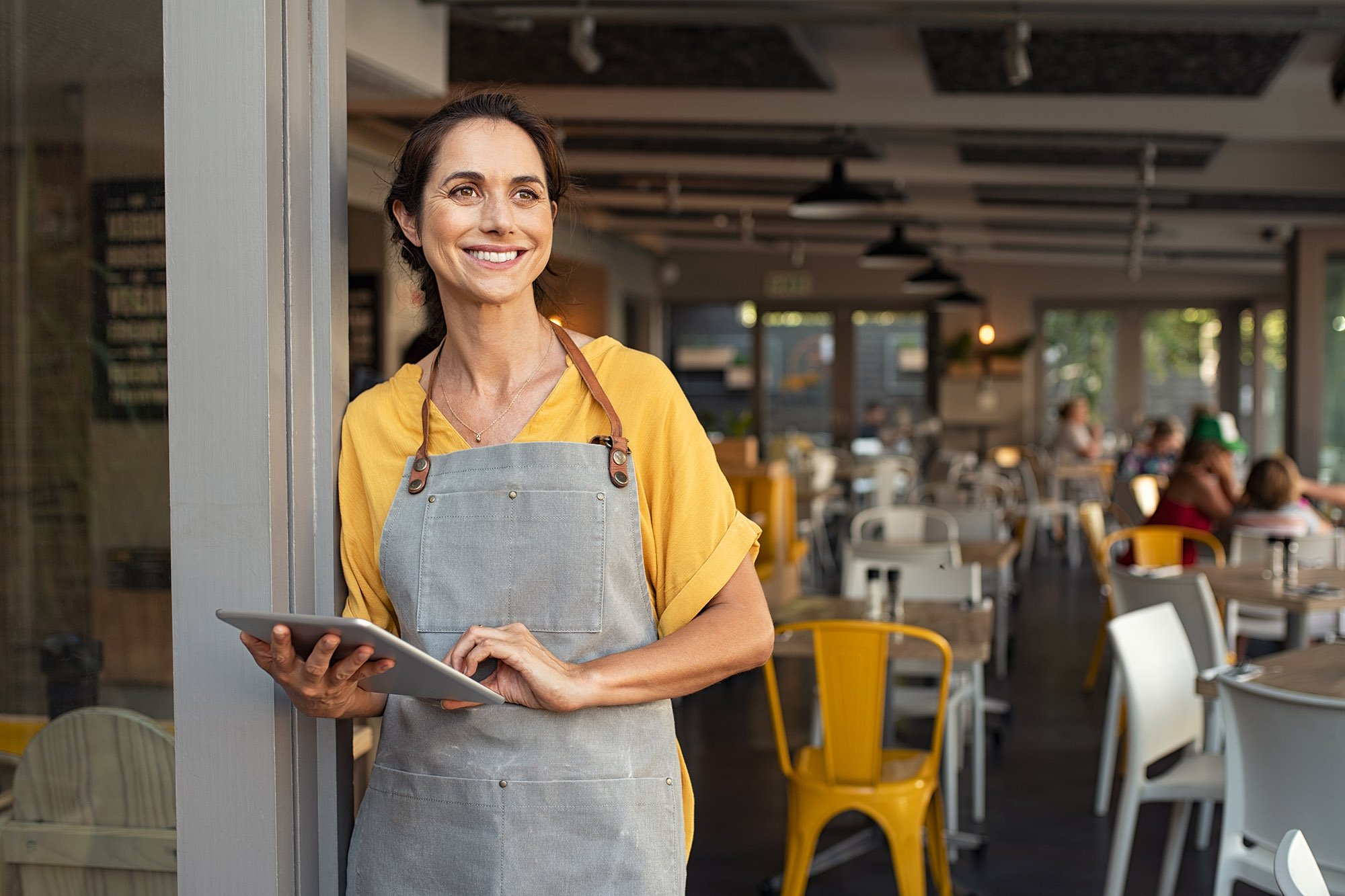 Ok, I get it. It seems like we’re stating the obvious here, but the numbers certainly help bear out just how important this is.

Based on the data we collected on all types of tasks, we found that nearly one third (32.35%) were resolved within 24 hours—and over 60% were resolved within a week. Given that we didn’t have a baseline for how long it took businesses to resolve their tasks before adopting an organized system like OwlOps, we decided to dive in a bit further—and the results were pretty astounding.

When we brought our first client on, they were clearly struggling to keep things in order. They had to repeatedly ask staff members for tasks to be completed and it would often take days, if not weeks to resolve—as evidenced by a 17.7-day average resolution time in their first year. By year two, they had dropped to a 9-day turnaround. By 2020, after nearly 10 years of perfecting it, they had whittled their way down to just a 5.5-day average.

They weren’t the only ones. Another long-standing client peaked at a 18.9-day turnaround, but within four years had trimmed it to nearly a third (also 6.5 days). One of our most active clients started at a whopping 28.2 days and within four years had cut nearly 75% of wasted time, ending up at a 7.7-day average in 2020.

Even more impressive was one of our most recent clients: when they came aboard, they had a healthy—albeit still not ideal—resolution time of 13 days. From Q3 2018 to Q3 2020, they cut their average to just 2.9. 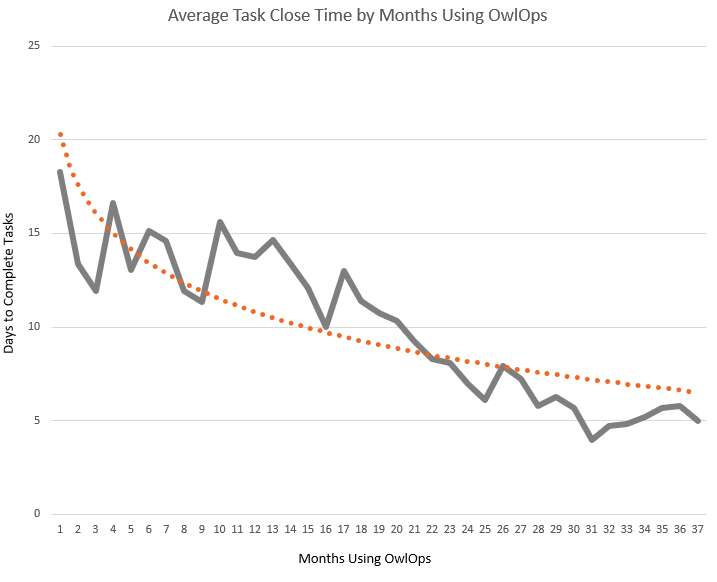 Unfortunately, long turnaround times are prevalent throughout the industry. According to a recent Zenput survey, 34% of respondents said that not resolving issues quickly enough was the primary hurdle to driving consistent team execution and customer experiences across their units/stores. When it came to quick service, respondents averaged a staggering 11 hours of their 40-hour workweek simply following up with stores and employees to ensure tasks were resolved. That’s over 25% of their workweek!

While that figure obviously isn’t ideal, it still stands to reason: phone calls, text messages, emails and most other forms of cross-team communication take time to contextualize, compose, and deliver. And it’s for that very reason that we built in task tracking and one-click update requests—they literally take but a few seconds.

So what’s this all to say? If there’s anything we’ve learned closing in on our first million tasks, it’s that having the right resources (like reliable IT/maintenance teams), practicing preventative maintenance, and emphasizing good communication and accountability can go a long way in ensuring that operations are not only efficient, but running smoothly. So if you’re looking for a way to stop asking twice and Get More Done, don’t hesitate to reach out. We’d love to make you a part of our next million.